Never Miss An Opportunity for Art! 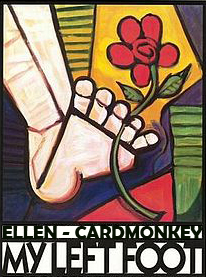 I'm guessing not many people remember the movie "My Left Foot" (1989, starring Daniel Day-Lewis)?  I don't either -- I just remembered the title as I went to type this post. I used Wikipedia and found the movie poster, and adapted the art here (at left, appropriately) to tell the story of my left foot. 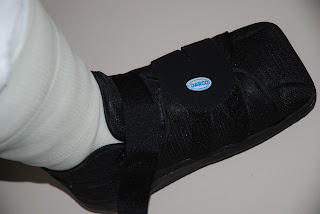 Here's how my left foot really looks -- or at least has looked for the past week. Yup, fully casted. No weight-bearing. Which means it's a struggle to get up to the craft room. I did the stair butt-climb to get up here, and suppose I'll slide down.

I've really missed crafting. I've been in exile -- on the couch downstairs, playing Solitaire and Pinterest on the iPad. BORING! 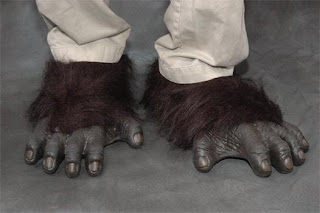 Long story short, I apparently suffered a series of small accidents (sprain/near-tears of the Achilles tendon, and of the Plantar Fascia, in two separate incidents). And it's guessed that I suffer from some diabetic neuropathy because the pain wasn't as intense as it should have been, and I kept walking. For months. Which led to the onset of a serious injury called "Charcot's Foot" where all the bones and muscles of a diabetic foot essentially collapse and re-fuse, deformed. It was confirmed by an MRI a week ago ...

No wonder I have been in enough pain to get me to the doctor's (yeah, finally!) Hopefully it was in time to save the foot. In the meantime, the cast's on for four weeks ... and then we'll see. It will likely go back in a "boot" (lovely Gorilla foot, a neighbor called it) ... therapy ... hopefully no surgery. Time will tell.

In the meantime, I am tempted to decorate my cast. Decoupage? Patriotic theme? Summer bummer? Here are some examples, found -- yup -- via Google:

Or should I decorate just the boot? 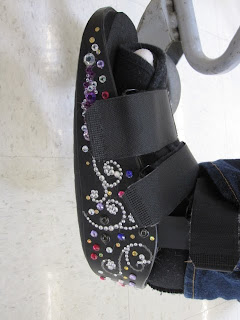 aww hunee, i am so sorry this has happened. i say just the boot. who really keeps casts after they come off but me?

YIKES! Hope you don't have to have surgery after this!! As for decorating, just the boot... though some doodling on the cast may be in order. :) Feel betta!

I vote for just the boot!!

You are such a trooper Ellen. Speedy recovery. I say bling both the boot and cast. Lots of pinks, and oranges and blues for the summer.
Ashley

OH my I came here because I read your comment on Capadia Designs blog about the Cricut and Cameo and being a material girl. I can so relate. Give me craft stuff instead of shoes. LOL
I only have a Circuit and am thinking about a Cameo but the same thing comes to mine. I already spend more time on the computer than crafting (like now) lol but I am glad I found your blog and you.
Nice to meet you,
Linda

Ellen,
I hope this cast fixes you up! It is a good thing you are still able to make it up the stairs to craft!
Get well soon(: