My Creativity is Ever Blooming! 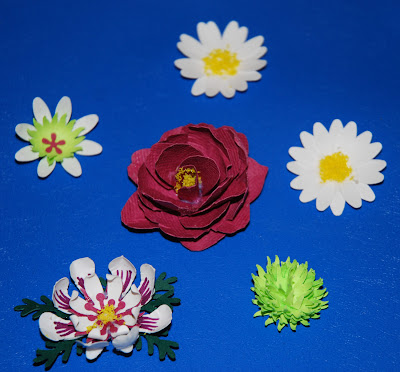 Did I mention that my creativity was set ablaze (not merely "sparked") at the recent Creating Keepsakes Convention in Valley Forge?

At one of the booths I visited ... I'm pretty sure it was sponsored by Scrappily Ever After ... the exhibitor featured Punch Bunch paper punches. The punches cut out simple shapes such as a pear or an apple, a sun, a daisy, and a variety of leaves. You can use these shapes to build flowers that resemble something you might see in a garden, like the daisy top right (pic) ... or something seen only in your imagination (bottom left). Both are just as pretty, I think!

There was a demonstration of the use of a tool kit

and steps used to create beautiful paper flowers using everyday cardstock. The tool kit consists of a stylus with interchangeable tips (some round, some pointed), a stylus and reverse tweezers. The tool kit is pictured here. The "trick" is to rub the cut-outs with a tool to soften the paper and to "give the leaf life." (Try saying "leaf life" 5 times quickly!)

To rub the cut-outs (or "punch" outs), one handy trick I learned was to use a hard foam piece as a support underneath the piece of paper you're softening. The demonstrator (Jeanne) recommended a mouse pad or a foam door hanger that you can get for $1 at any local crafts store.

A handy tip: Jeanne said she likes to use the door hanger because she tapes a piece of waxed paper in the opening of the door hanger. She uses the waxed paper as a place where she puts a glob of glue that she uses sparingly to assemble the paper flowers.

The punches are versatile! Who would think that a pear shape becomes a petal, and the sun can be "stirred" to form the puffy part of a stamen or a flower itself, like a clover flower. (See my picture of the flowers I made, upper left here. The green clover flower at the lower right was made scrunching up 5 punches of a sun!)

For the center of the daisies (upper right), I used a product I found at the same table. It's called Flower Soft and is pictured here, at right. It is acid-free pvc shavings that have been dyed a variety of colors. A little pinch goes a VERY long way!

I will be posting soon to show you how I use these beauties on cards, in shadow box frames, and more. Oh my, how I love paper crafting!
By Ellen Jarvis at August 03, 2010

Email ThisBlogThis!Share to TwitterShare to FacebookShare to Pinterest
Labels: paper flowers, Punch Bunch, Scrappily Ever After

Ellen, I love your flowers. I don't have many punches and those that I do have are very basic or they are border punches. I did see a couple of videos on how to make your own "Prima" like flowers and decided to give it a try. I cut out flowers using various carts and my Cricut. I really liked the way they turned out. I'll have to put some photos up on my blog ..... I'll let you know when I get that done.

This is incredible, I am so jealous. I have no idea how you guys make such beautiful flowers I am all thumbs. I would love to learn how. I really love the daisy's they just pop off of the paper. They would really cheer someone up in a get well card.
Lynn Speckhard