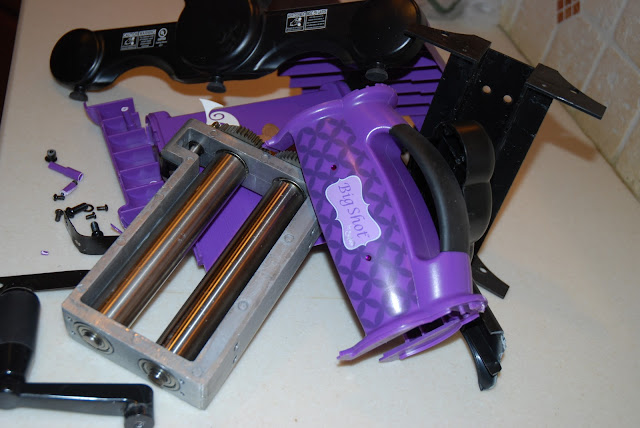 Overstuffed, it choked to death.
I tried the Heimlich Maneuver ...
to pry loose the sandwich. I had to use sheer force, and a sledge hammer.
Emergency crews were unable to save Big Shot, who lost a few (gear) teeth
during its chewing.
He just lost his bearings.
Life support was futile.
Big Shot led a short but distinguished life in the Paper Jungle.
In addition to the sandwich he was eating, Big Shot is survived by his Cuttlebug, to whom he had been wed for just a few years, as well as dozens of little SizzLit friends, dies, and Folders and plates.
Burial will be in the Recycling Bin.
No viewing is planned other than the photo above.
Big Shot: Died with a die in his mouth.
Go figure.
R.I.P.
By Ellen Jarvis at October 23, 2011

My condolences. Guess a trip to Michaels is in order.

Deepest sympathy I know how hard it is to lose a loved one....
You post gave me just a good laugh love the music...

I'm so sorry for your loss. I'm sure the Cuttlebug is suffering too. Please extend my condolences to her as well. I hope that the both of you are comforted by the fact that he died while doing something he loved.

So sorry for your loss, but that so made me laugh :)

I am so sorry (chuckle, chuckle) for your loss (snicker)and send my heartfelt condolences. You are too funny. I am really sorry about your Bigshot tho'. Sounds like something a good dose of retail therapy would help to me.

Hehehehe
Thanks for the morning chuckle!
So sorry for your loss :(

At least he died doing something that he loved. Know that he lived a happy life, and rejoice in that.

So, do you send flowers or cardstock for a funeral like this?

My sincere condolences to you and yours for your loss. And thanks for the chuckle!

The song is so fitting for the occasion...Sorry fr your loss, but thankful for the laugh!

oh sorry for the loss of a great friend.... may he RIP and remembered by all paper and folders... :) parkernana5 at cox.net

We at ScrappinMyStressaway offer our sincere condolences....they were sincere until the song "Another one bites the dust" started playing ~ then the giggles broke out!!! RIP Big Shot!

lol - your post is hilarious! thanks for stopping by my blog for the Halloween hop! www.papercreationsbymindyblog.blogspot.com

too funny..oh I mean sorry for your loss LOL

So terribly sorry for your loss..In lieu of flowers is that an account where we can send money to help with the costs? ;)

Some things should never die but when they do, it's time to shop!!! Loved your funeral announcement, needed the laugh! the music is way past PERFECT!! Claire
www.scrapmyway.blogspot.com

Time to get a Cricut so you can play with the new CTMH cartridge!! ;)

I would love tho see the sandwich he choked on, the poor thing, I wonder if his warrenty will cover, its worth a phonecall, all they can say is no...

I just had similar happen to my Cuttlebug. We took off the handle and right side and the metal was cracked inside and unfixable. :-(
So I ordered a "Big Shot". Thanks for warning me about the problem. I'm sorry your dear Big Shot hit the dust/recycle bin. :-)

My Happy Place by Vanessa said...

Oh MY! I'm so sorry but that was hilarious! I needed a laugh! I think you handle stress well! :D