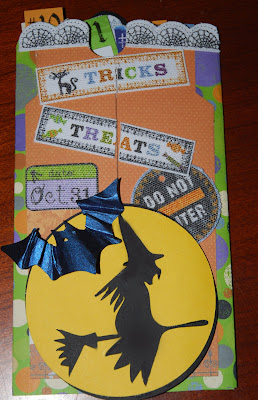 Here is a revisit to an old post, just because I really like this card and Halloween's coming this weekend ...

Ahhhhh, Autumn. A beautiful season! Waning days of summer that keep the air warm, mixed with wind that blows the migrating geese from pond to pond.

Here is a first stab at a Halloween seasonal. I used the "slider card" template from Let's Party Hearty, and decorated it with boo-tiful papers and stickers from MLYB - My Little Yellow Bicycle's "Boo-Ville" collection.

I cut the witch on the broom and the moon behind her, as well as the bat, from files found in the User Gallery of "Make The Cut". The bat was supposed to be positioned flat on the paper, but I felt he looked more sinister with his wings scored and folded to look like he was in flight. I inadvertently cut the bat from a midnight-blue/black two-sided paper and then realized I liked the shimmery midnight-blue side best. Sometimes, mistakes are just meant to be! 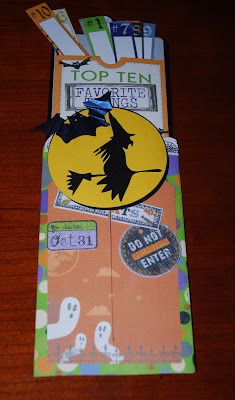 When you slide the card open, the moon with the witch rises to expose the super "Specialty Embellishment" also from MLYB. It is a packet that says "Top Ten Favorite Things of Halloween" and contains 10 slips of paper on which the sender or recipient would write those favorite things.

The tab on the slider (a pull-up) is a fabric ghost, also part of the MLYB Boo-ville collection. I think it looks intricate and complicated, but it really didn't take all that much time to make.

I hope you're having a boo-tiful season too.