How did you start to Cricut?

So in order to win a Cricut Circle exclusive cartridge called "Sophie," my friend Erica asks the question: "How did you start to 'Cricut'?"
I can honestly answer: It's all my daughter's fault. I wasn't "into" papercrafting at the time ... I was into sewing, (or maybe getting into sewing, at least) and just bought a hugely-expensive sewing/embroidery machine that was to be my Next Favorite Hobby.

I'd never heard of "Cricut" before when she asked for one for Christmas, 2009. I went to Joann's, paid full price for a Cricut Expression (eeek, and full price for several cartridges) ... and then looked more at the box when I got home ...

"This would be fun to use with my sewing machine, to applique and embroider."

I struck a deal -- Daughter could have it early (October), which she wanted so she could make her own Christmas cards, if she'd keep it at my house not at hers a mile away ... and if I got to use it, too.  "Sure!!" -- which almost guaranteed that she'd get more cartridges ... and more ... and more .... 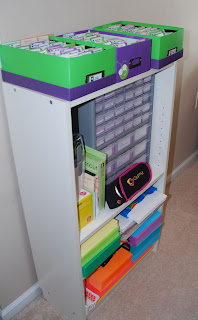 I started using the Cricut more than she did, and very quickly had to buy one of my own so we could craft together. And more cartridges. And more paper. And she bought a Cuttlebug ... and embossing plates.

And then all of THESE cartridges (shown at left), consolidated into boxes for the books/overlays and drawers for the carts) ... more than 100 by now ... plus a Gypsy so we can both craft.

Pretty soon we bought more tables, had expanded to fit the entire upstairs of our house (a junior 1-br apartment where Daughter once lived, pre-wedding).  Just a few months after that first Cricut, Daughter announced she was pregnant ... and I started scrapping about her pregnancy.

I never finished the scrapbook and then along came grandbaby Charlotte.  I will say that we did the shower invitation and decorations (and blogged about it) ... birthday party stuff (1 year later, and the pregnancy scrapbook STILL isn't done!) ... and I'm now Cricuting Elmo paper-piecing projects for Charlotte, who's now walking. Talking, learning to use the i-Phone and i-Pad, and pretty soon will want her own baby Cricut. Oh brother!!!

And now, my deluxe sewing machine hardly ever sees me ... except if it's to stitch a border around a card. UGH.

Learn more about Erica's call for entries, below.  Maybe if you win the Sophie Cartridge, you'll let me borrow it?

Next up ... When does the word
"Cameo" not apply to jewelry?
And why would I want one more than I want jewelry?!
And HOW MANY MACHINES can fit into one craft room!?﻿
By Ellen Jarvis at March 27, 2012

LOL, loved reading your story, our stories are so much alike , I was into sewing too and had bought a new serger! My friend got me into scrapbooking, she says to this day that she created a monster out of me, hehe , that she did!!!
I never stopped since and like you one of my earliest projects was a baby album , mine is not finished either!!! See , lot alike! the only thing is you have way more than me, I still only have 4 cartridges but plan to buy more very soon. I also joined Cricut Craft room so I can pretty much use any cartridge anyway!

What a great story Ellen! I think the secret to Cricut is that it's super addictive and they keep you coming back with awesome cartridges and accessories all the time! I can hear it...."hello my name is Linsey and I am a Cric-a-holic"! LOL! I have a 3 year old niece and am just waiting for the "baby Cricut" to debut so I can buy Hannah one lol! With the technology today, it'll be a piece of cake for little Charlotte and Hannah! :)I like how you store your cartridges because a lot of ladies don't keep the boxes anymore, but I like to keep mine intact in the big, bulky boxes so this is a great idea! I think I'll have to "lift" it from you and your daughter! Thank you for sharing your wonderful Cricut story, hope ya win that cartridge buddy! xoxo

Well i have to say my sister introduced me to the Cricut...Was alittle intimidated @ 1st, but she helped get started..But i do rely on You Tube also for help/idea's..Got the 5 Yr. Anniv. E2 & i luv it..thx.. for the chance on winning the cartridge..Also enjoy getting up-dates from u'r blog, great idea's/projects..thx..again..
texasgrama7@gmail.com